Aeolus was the keeper of the winds in Greek mythology.


Wind-driven transport and deposition of sand is called an "aeolian process".

Aeolian processes occur in deserts and on beaches, or wherever there are granular materials and strong enough winds to move the particles.


The transport of sand is a function of particle size and wind velocity.

Sand blowing off a dune crest is shown in an image below of the Kelso Dunes.


Dunes are accumulations of sand blown into mounds or ridges. The windward side of a dune has a gentle slope. The lee side, or the downwind portion of the dune, has a steeper avalanche slope called a slip face or Barchan dune. 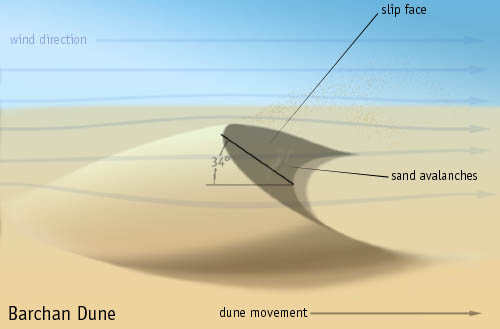