Where does earth's oxygen come from?

Microbes in the world's oceans provide about half of the earth's oxygen. Macro algae, like kelp, and land plants provide the other half. 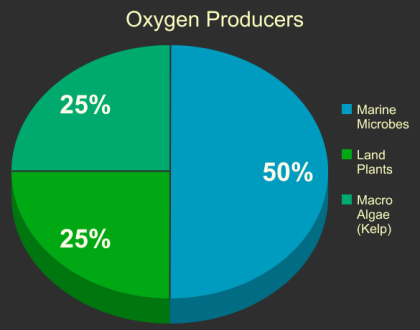 A two gallon pail of sea water contains more bacteria then the earth's human population. For perspective, recent estimates put the volume of the Earth's oceans 352 quintillion (1018) gallons of water.

On the boundless expanse of the oceans,


“Doesn't it seem to you," asked Madame Bovary, "that the mind moves more freely in the presence of that boundless expanse, that the sight of it elevates the soul and gives rise to thoughts of the infinite and the ideal?”
― Gustave Flaubert, Madame Bovary

Incredibly one marine species, prochlorococcus, produces 20% of all atmospheric oxygen.

Prochlorococcus is the single-most abundant phytosynthesizer on earth. It is the ocean's oxygen producing powerhouse.


"invisible engineers that control the chemistry of the ocean"


"We have an incredibly important relationship with these marine microbes that have very large scale consequences and we're just barely beginning to understand what that relationship looks like and how it may be changing."
― Melissa Garren