Smoke travelled 1130 miles overnight from the Fort McMurray wildfires, drifted into the window before daybreak, bringing the scent of burning pitch.

In Chinese cosmology, Yin and Yang is a metaphorical construct of opposing but complimentary forces. The continuous joining and separation of Yin and Yang regulates the rise and disappearance of all entities and phenomena in the cosmos.

A theme in the poem Fire Flowers by E. Pauline Johnson, first printed in a Canadian newspaper in December 1894, is that from desolation comes renewal. 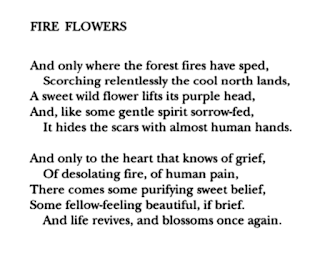 The poet's personified purple-headed wild flowers emerge from the desolation of fire. Life revives. Life's resilience is its wonder.

If Yin is the tender green shoot, then Yang is the fire's heat that melted its seed coat.

In apparent cyclical perpetuity, death is the catalyst. Plants with fire-activated seed coats germinate and grow soon after the fire recedes. Such plants are called obligate seeders.


Obligate means to oblige, compel or commit, which are actions with an implied interdependence like the continuous joining and separation of Yin and Yang. In a analogous way, all living things become obligate seeders.