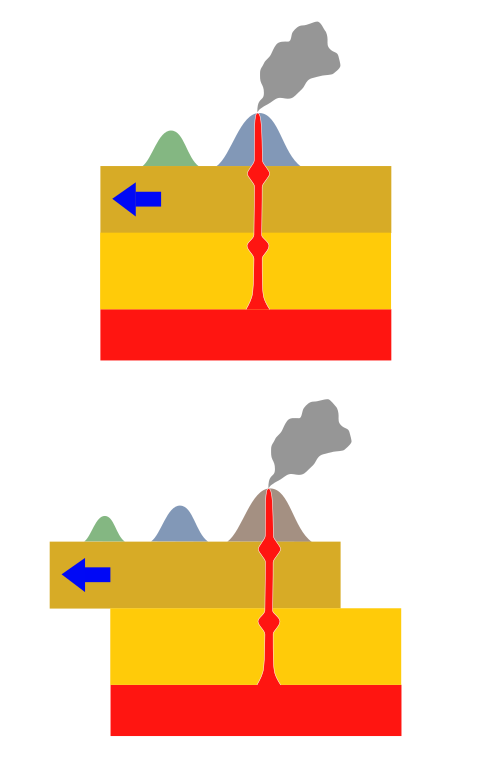 Geologists posit that hotspots, expressed on the ground surface as observable volcanic features, are fed by underlying super-heated plumes of mantle materials (shown in red).

The large-scale motion of Earth's lithosphere (shown in yellow) is known as plate tectonics.

Mantle hotspots remain stationary compared to the dynamic shifting of Earth's plates. As the lithosphere moves laterally, chains of volcanic islands in the ocean, or chains of continental volcanoes, form over millions of years.

The Lava Creek eruption, the most recent significant volcanic event in the chain, occurred some 640,000 years ago causing the Lava Creek Tuff and the Yellowstone Caldera.

The longest continental chain, three times as long as the track caused by the Yellowstone hotspot, has recently been identified in Australia by a team of geologists.

Geologists have recently identified the longest series of continental volcanoes, named the Cosgrove volcano track. The track spans 1,243 miles across eastern Australia (shown below). Geologists posit that as Australia moved north over a hotspot, volcanic features were created over the course of 33 million years.


"We realized that the same hotspot had caused volcanoes in the Whitsundays and the central Victoria region, and also some rare features in New South Wales, roughly halfway between them."
― Dr. Rhodri Davies, Australian National University

Hotspots occur where rocks melt to create flowing magma. Heated by the hot core, fluid rock in the mantle rises and falls. Plumes of magma occasionally penetrate the crust to produce volcanoes. Over millions of years, continental plates move laterally over the hotspots thus creating a travel log expressed by volcanic features marking the surface of the Earth.


"Ultimately this new understanding may help us to reconstruct the past movements of continents from other hotspots."
― Dr. Nick Rawlinson, University of Aberdeen