Seasons are distinguished by changes in weather, ecology, and hours of daylight. What accounts for seasonal changes?


“One must maintain a little bit of summer, even in the middle of winter.” ― Henry David Thoreau

A common misconception is that seasons occur because of differences in the distance between the Earth and the Sun throughout the year.

A number of years ago, the documentary “A Private Universe,” about how we misperceive the world around us, was filmed at Harvard’s commencement. Twenty-three faculty members, alumni and graduating seniors were asked, “Why is it warm in the summer and cold in the winter?” All but two answered incorrectly, saying the Earth was closer to the sun in the summer than in the winter (it’s actually closer in January). ― John Edward Huth

The four seasons of the year are caused by variations is sunlight due to the 23.5° tilt of Earth's axis. 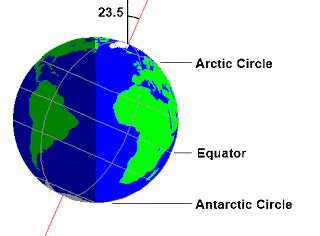 When summer occurs in a hemisphere, it is receiving more direct sunlight than the opposite hemisphere where it is winter.

In winter, sunlight hits the earth at oblique angles so it is less concentrated.

Seasonal changes become more pronounced as our absolute latitude increases (i.e., as we move farther from the equator).

Much of our literature has been written with a northern hemisphere bias:


“What good is the warmth of summer, without the cold of winter to give it sweetness.”
― John Steinbeck, Travels with Charley: In Search of America

The carousel-like change experienced traveling on what Buckminster Fuller popularized as Spaceship Earth, is captured in Joni Mitchell's song The Circle Game: