No one living today can recall a volcanic eruption of such magnitude, or of such potential disruption to human safety and systems, and yet we know that many volcanic complexes in the United States and around the globe are capable of someday erupting similar or larger volumes of molten rock and ash.
~Marcia McNutt, USGS Director

The site has been preserved since 1980 by the Katmai National Park and Preserve.

In June of 1912, glowing hot pumice and ash spewed from the Novarupta-Katmai volcano. It flowed over terrain destroying life in its path. The ash, pumice, and gas ejected cast a haze-darkened sky over most of the Northern Hemisphere. 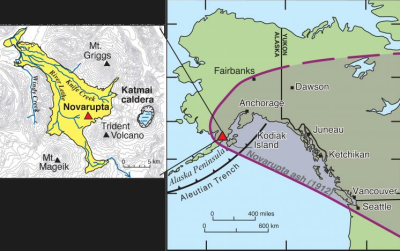 The volume of ash ejected by Novarupta-Katmai, if concentrated in one place, would be enough to bury the city of Anchorage 3 miles deep.

Volcanology is the study of volcanoes, lava, magma, and related phenomena. The term volcanology comes from the Latin word vulcanus.

In ancient Roman religion and myth, Vulcan is the god of beneficial and hindering fire, including the fire of volcanoes.

At the time of the Novarupta-Katmai eruption in 1912, the study of volcanic eruptions was in its infancy. Researchers had few points of comparison. Field investigations of the Katmai site provided key insights that contributed to advances in volcanology. Novarupta-Katmai has been one of the most studied eruptions in the world.

I have seen so many eruptions in the last 20 years that I don't care if I die tomorrow.
~Maurice Krafft, Volcanologist, on the day before he was killed on Unzen Volcano, Japan 1991.